Many religions, even those involving a variety of symbols, hold one above all others to represent the religion. For Jews it is the star of David. For Christians it is the cross, although they employ dozens of variations of the basic design. For Wiccans, it is the pentagram.

Pentagram of the Greek Pythagoreans, who saw it as reflecting perfect proportions and harmony with itself.

The pentagram has existed for thousands of years through a variety of cultures.  They have a great many different meanings, almost always positive ones.
As a symbol of our religion, the pentagram is depicted point-up.  Many Wiccans will rabidly insist it is only used in this orientation, thus distancing ourselves from Satanists, who commonly identify themselves was a point-down pentagram. However, there are, in fact, some Wiccans (and witches) who use pentagrams oriented in both directions, representing a variety of different meanings. 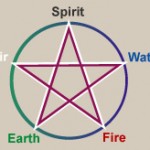 The pentagram symbolizes the union of the five basic elements . This concept was popularized in the 19th century.  Spirit is ascribed to the uppermost point, with the implication that Spirit surmounts the physical elements. When the pentagram is point down, the physical world supplants the Spirit as supreme, hence its association with Satanism which  revels in humanity’s material existence.
This hierarchy of elements was very common among ceremonial magicians.  However, Wiccans often see the elements as equal. 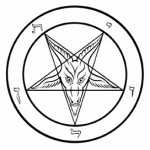 Baphomet Pentagram as used by the Church of Satan

Both Wicca and Satanism borrowed the pentagram from ceremonial magic, where it has existed for centuries before the advent of Satanism or Wicca, which are both fairly new movements.  Thus, there is no direct connection at all between the two groups using the same symbol.
A stereotype of Satanists is that they invert everything holy in order to mock it.  Thus, you get stories of masses being said backward and upside down Satanic crosses, neither of which, incidentally, is actually commonly done by Satanists.  Taking that a step further, and some claim Satanists stole “our” pentagram and turned it upside down.  They didn’t. 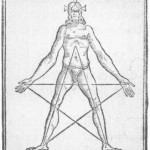 Pentagrams have only been associated with Satanism relatively recently.  There is no traditional opinion of Christianity about them.  They were not seen as a mark of paganism or witchcraft.  In fact, it was sometimes used as a symbol of the five wounds of Christ.

4 Comments to "The Pentagram"

We cannot load blog data at this time.